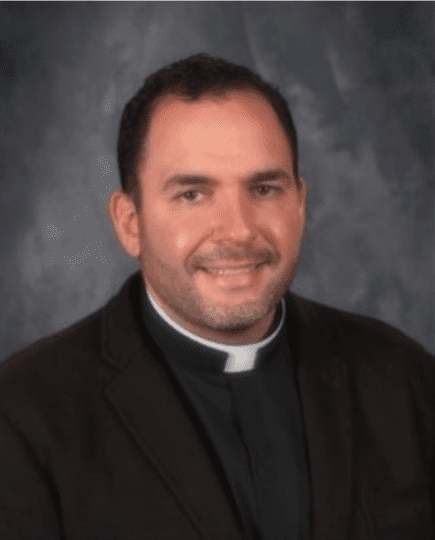 Father Cicero became the pastor of Blessed Sacrament and St. Elizabeth Ann Seton parishes on August 22, 2020. Born and raised in Warren, Ohio he attended Catholic schools at St. James, St. Mary’s, and John F. Kennedy Catholic High School, class of 2001. After one year of college at the Catholic University of America in Washington, D.C., he entered the seminary for the Diocese of Youngstown. In 2005, he earned a Bachelor of Philosophy and History from the Pontifical College Josephinum in Columbus, Ohio. As a seminarian at the Pontifical North American College in Rome, he received a Bachelor of Sacred Theology from the Pontifical Gregorian University in 2008. He continued his studies at the Pontifical Saint John Paul II Institute for Studies in Marriage and Family. Bishop George V. Murry, S.J. ordained him to the priesthood on July 18, 2010. As his first priestly assignment, completed a License of Sacred Theology at the John Paul Il Institute in Rome. In 2011, he was appointed parochial vicar of St. Christine Parish in Youngstown. On February 1, 2014, he became the pastor of St. Jude, Columbiana, and Our Lady of Lourdes East Palestine where he served until coming to Warren. Father’s mother and father live in Singer Island, Florida, and Warren. He has an older brother and younger sister and brother-in-law. Father loves parish ministry. He asks for prayers for vocations to the priesthood.